When a hiker was touring Norway’s rugged Haukeli region, he happened upon a Viking sword that could be 1,200 years old. When Gran Olsen came to a halt to rest, he found the preserved sword in the rocks.

“It’s pretty unusual to find Viking age remnants that are so well-preserved… it could be used today if you sharpened the edge,” Per Morten Ekerhovd, a county conservator, told CNN reporters. Hikers frequently uncover relics in Haukeli, according to Ekerhovd, who does observe that the sword is particularly well-preserved. This is most likely owing to the region’s frost and snow cover for half the year, as well as low humidity in the summer. 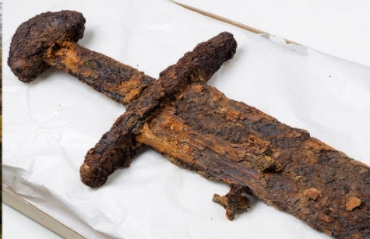 Without its original grip, the wrought iron sword is little over 30 inches long. According to experts, it could have come from a burial site or belonged to a traveler who died or misplaced it. One thing is certain: mining iron was a time-consuming and expensive operation, therefore the sword was most likely a prestige symbol.

Though it has yet to be conclusively studied, the sword most likely dates from 750 or 800 A.D., the beginning of the greatest period of Viking invasion. Experts from the University Museum of Bergen will investigate the artifact and its environs in the hope of uncovering more Viking treasures.