Scott Waring, a well-known ufologist and virtual archaeologist, has shared another mysterious discovery with his blog followers. He noticed a massive white triangle on the slope of the Martian hill when looking at a picture of the surface of Mars.

This cannot be a simple stone, according to the ufologist, because such structures have yet to be discovered in photographs of the Martian surface. So, what exactly is it? This, according to Waring, is the door that conceals the entrance to the underground system. 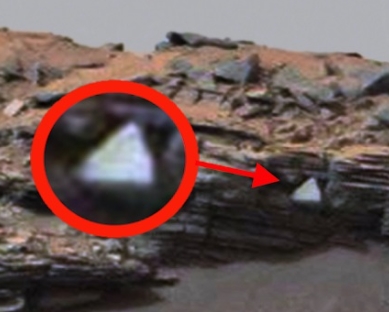 The door prevents hot air from penetrating the structure’s interior. The ufologist noticed a square opening near the triangular structure that could be a window.

Some ufologists and other independent researchers have previously speculated that life remains on Mars, but that it was forced to travel deep underground due to a planetary cataclysm that occurred in antiquity.

When it comes to the presence of life on Mars, Scott Waring looks for evidence by carefully examining photographs of the Martian surface. To put it lightly, some of his conclusions seem implausible, but others are well worth considering.