Several cyclists traveling by the road late at night captured the terrifying video of the alien-like creature. According to india.com, the alien-like figure was sighted over the Chadwa Dam bridge in Jharkhand’s Hazaribagh.

A video of an alien-like ghostly figure walking through the center of a road in Hazaribagh, Jharkhand, has gone viral on social media sites.

“This Video is from #hazaribagh #Jharkhand claiming Creature depicted in this Video is a #Alien & viral with speed, no one claiming it to be fake or false but much real,” a Twitter user wrote. Is it true that they’ve arrived, or are these merely rumors?” 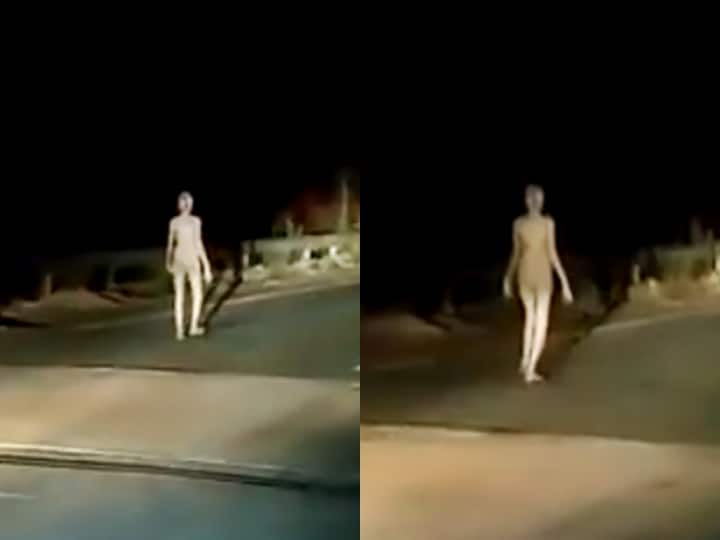 The origin of the footage from Jharkhand, which shows an alien-like figure going over the bridge, is unknown, according to a local authority speaking to republicworld.com.

The official source elaborated on the now-viral 30-second video, stating that no one had been to their office or contacted to complain or register a query, and hence no inquiry had been launched as of yet.

Several bikes can be seen passing by the alien-like figure going down the street in the dark in the video. Meanwhile, several other riders noticed the thing and came to a halt, while another began filming it.

The males can be heard remarking, “chudail lagrahi hai (looks like a witch)” in the video. When the bikers begin to pass by the monster, the human-like weird monster comes to a halt, looks behind it, and then resumes walking.

However, the insider, who spoke on the condition of anonymity, went on to describe her own personal experience. She claimed that she and her coworkers had been walking the route for years, in the morning, at night, and even at 1-2 a.m., but that they have never seen anything suspicious.

There are numerous unanswered mysteries surrounding this single incident, which has drew the attention of thousands of people on social media platforms.

The video has become talk of the town. People are assuming it to be an Alien and it actually could be, keenly observe the 13th second of the video, A red Lapros wing UFO flying with jangling sound. Place-Near Hazaribagh,Jharkhand @isro @NASA @aajtak @ndtv @republic @BBCWorld pic.twitter.com/P4hcLf5yNn