On Tuesday, a prominent TikTok user by the name of “stinkyeyescrappy” posted a video asking the internet to name the species of lizard she saw during a trip to Boulder City, Nevada.

As you can see, the video she uploaded sparked a lot of debate, with most people agreeing that it was either a different species of lizard or an alien specimen entirely. 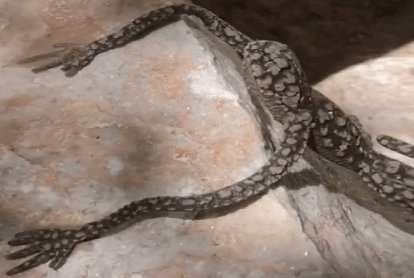 With its uneven skin from head to tail, this “small beast,” as she refers to it, eerily resembles a lizard, but as you can see, it is much too elongated to be a lizard, to begin with, at least some identifiable lizard to say the least.

The majority of comments agreed that this is an alien species, particularly after it was found in Nevada, which is home to the hidden military base known as Area 51.

So far, the video has gotten 2.8 million views, 550 thousand shares, and 16 thousand tweets, with the majority of them jokingly referring to it as a Star Wars alien or a “Lizard Slenderman” due to its elongated body.

We can’t say for sure if it’s a genuine specimen, but there’s no need to suspect the customer just yet.