In case you haven’t heard already, the Mars Global Surveyor was officially deployed to Mars on September 11th, 1997.

It was one of the first attempts to correctly read the Red Planet’s surface levels and discern whether it was worth inhabiting or not. 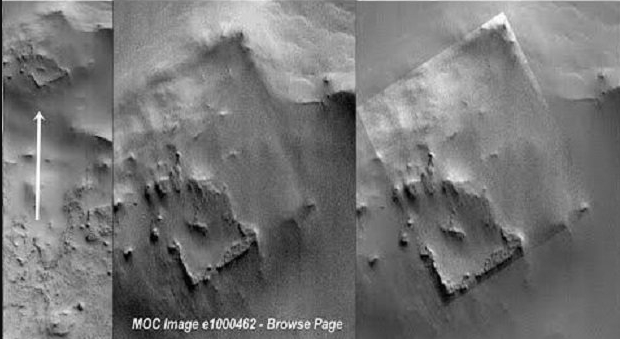 Surprisingly it was also the first to uncover the fact that ancient rivers used to flow on the surface of Mars too, proving the fact that in theory, life could exist on the Red Planet after all.

This following picture however is by far the most interesting one we have ever received from it. As you can see, these are the ruins of an ancient civilization on Mars.

Not only does this prove that life did exist on the Red Planet in ancient times, but this also proves the fact that they were intelligent and quite resourceful too.

We can’t actually say when the ruins suggest this civilization lived on the surface of the planet but what we can tell you however is that this picture in itself is definitive proof of the fact that life really did exist here in ancient times.

NASA was unable to prove it to be a natural occurrence too since you can clearly see the fact that it is too symmetrical for it to be anything natural, to say the least.

Sadly though, during its third official mission to Mars, the Global Surveyor malfunctioned on November 2nd, 2006.

The whole project was scrapped by January next year and as you may know, it was also the last time we ever saw the ruins on camera.