The strange footage of the long, dark object plunging into the ocean was captured on Jangkar Beach in East Java, with some speculating that it was a crashed UFO.

At Jangkar Beach in East Java, Indonesia, a long, black object fell from the sky. 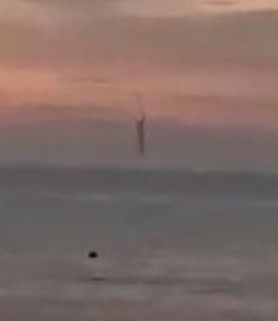 A dark cylindrical object can be seen softly descending towards the water’s surface in the footage. The mysterious item then vanishes beneath the waters.

“What is this anchor thing that fell from the sky?” the video was captioned on Facebook.

The footage astounded the Indonesian government space agency so greatly that it decided to investigate the situation thoroughly.

A team of experts was dispatched to the location, according to Emanuel Mumpungi of the National Institute of Aeronautics and Space.

No wreckage has been discovered so far.