The image depicted a two-legged creature coated in brownish-reddish fur crossing the river, clutching something similar to the same species, but smaller in size, most likely its cub. The photo was described as follows: 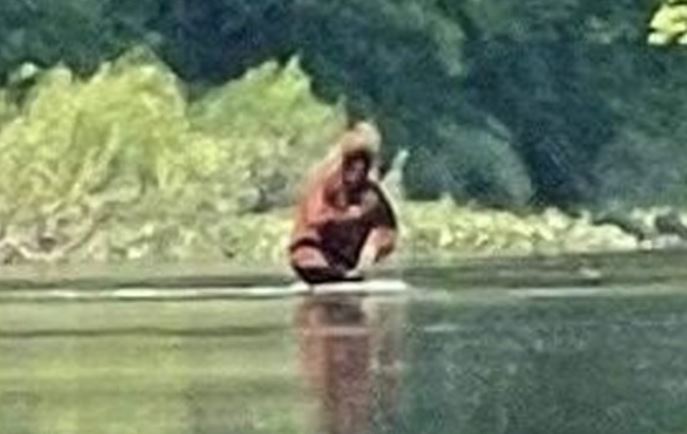 “This photo was taken by my cousin while he was kayaking on the Cass River in Michigan. I’m not sure what it is, but I forwarded it to a few folks to see what they thought about it. Some think it’s Bigfoot holding his cub, while others say it’s Bigfoot carrying a deer carcass.

According to researcher Kyle Shaw, who examined the video, the monster does appear to be holding its toddler and is “Bigfoot-like,” though he adds, “I’m not going to claim it’s certainly Bigfoot.”

“I’m not claiming it’s Sasquatch, but a lot of what’s going on here suggests that something is moving along the river, leaving a wake, and it appears to be carrying the kid. The baby’s head is positioned behind the mother or father. It should be on the child’s left shoulder and back, but you can see his torso, leg, and foot. “It’s incredible,” Shaw says.

“The child does not appear to be a newborn; he is fairly huge, perhaps half the size of his mother or father who is carrying him across the river,” Shaw added.

Many netizens agree that sure, this is a yeti with a cub, but there are also enough critics who feel that the photo just depicts a hunter in camouflage carrying his dog, or that it is all a fraud with a guy dressed as a yeti.

The Cass River travels 61.5 miles through the Tamb region of Michigan, making it impossible to pinpoint the exact location of the observation without additional information.

According to the Bigfoot Field Research Organization, Michigan has the tenth highest number of recorded Bigfoot sightings in the United States (BFRO). Sanilak has the most recorded sightings of the Kass River among the regions through which it flows.