This huge iceberg was recently caught on camera as a group of nondisclosed UFO hunters captured it through the use of Google Earth.

This strange iceberg is not only massive but its shape also brought up a lot of concern as nobody has ever seen anything like it.

This massive 50-meter-long iceberg is said to have broken off of an ice shelf or a landmass but it’s too big to not be noticeable where it sprung off of so this doesn’t make all that much sense either.

Instead, experts decided to categorize it as most likely a vessel that is meant to be camouflaged as one such iceberg. We know this based on the fact that it looks nothing like a tabular or non-tabular iceberg like the ones we’ve seen before. 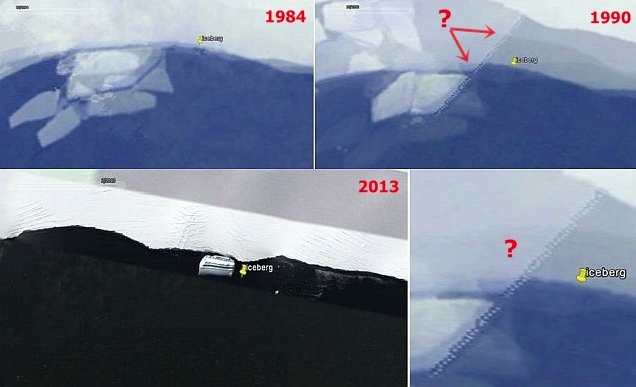 This one looks nothing like either of those two categories and as you can see from the pictures it wasn’t there in 1984 or 1990 although it did appear in 2013 out of nowhere.