This new stranded UFO was discovered not too long ago off the coast of Antarctica. The discovery was made through Google Earth and the following days after he snapped the picture, he posted all about it on the internet.

The communities online all agreed that it’s definitely a suspicious finding to say the least.

This oval-shaped UFO appears to have been discovered in the famous Graham Land from Antarctica and as you can see, like most other discoveries here, it’s quite the strange finding to say the least.

The video he uploaded online starts off with the coastline that he made the discovery near, and as you can see the rest of the video is him zooming in and out to show off the fact that this is real and that he didn’t edit any of it. 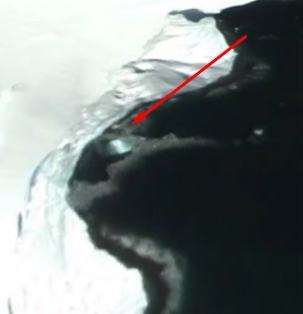 Although his discovery is definitely interesting a lot of skeptics weren’t as convinced as they all unanimously claimed that this is just a rock formation, not an actual UFO.

Marcelo Irazusta is the one we need to thank for this discovery, as with his YouTube channel “Planeta Snakedos” he also reported on several other discoveries including the aforementioned Graham Land.

Although it can be interpreted as just a rock formation at first, even he claimed that he was almost tricked but before long he noticed that it is shiny metallic not rocky, to begin with.

Check out the video yourself and don’t forget to leave a like for his efforts.