The global paranormal phenomenon of Unidentified Flying Objects (UFO), also known as flying saucers, was sighted in Nigeria in March 2011, according to residents of the small border village of Dulali in Lanzai South Ward, Darazo Local Government Area of Bauchi state.

Almost the whole village of a few hundred people saw a bright light in the sky shortly after morning prayer at the local mosque at the time. They soon observed a huge “flying city” or “floating city” falling from the sky. The location was Dulali, a border village in Bauchi State’s Lanzai South Ward, Darazo Local Government.

One of the eyewitnesses, Saidu Meshai Dulali, who makes a living brewing hot tea, coffee, and cocoa beverages for locals, told journalists from a Nigerian newspaper that he saw the light in the sky while preparing to start the day’s work after morning prayer at the local mosque.

He was suddenly conscious of a bright light pervading the world, accompanied by the realization that the heavens were collapsing on the village. 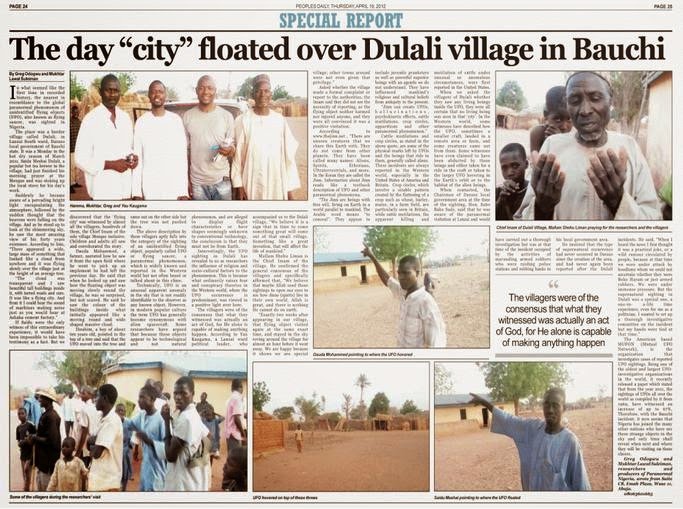 He had the most beautiful view of his forty years of life as he gazed up at the encroaching sky. “A huge, big mass of something that looked like a cloud appeared out of nowhere and was floating slowly over the village just at the height of an average tree,” he said.

“I saw beautiful tall buildings, tarred roads, and cars within the cloud, which was clear. It was as though you were in a flying city. And I could hear machines making noises coming from it, just as at the Ashaka cement factory.”

It would have been difficult to recognize Saidu’s evidence as fact if he had been the only witness to this remarkable case. Surprisingly, almost all of the residents, hundreds of them, including the Chief Imam of the village’s sole mosque, witnessed the “flying city.” The story was witnessed by both children and adults, who all corroborated it.

While out in the fields, Dauda Mohammed, a farmer, also witnessed the. He said he saw the UFO in the sky and was more shocked than afraid. He also claimed to have seen buildings in the “floating city” that were engulfed in clouds.

Ibrahim, a 10-year-old child, claimed to have seen the “UFO” move behind a tree and emerge on the other side. Since he seemed to think the UFO went through the forest, the young boy was clearly perplexed about his perspective view of the remarkable object.

“Perhaps Allah used those sightings to open our eyes to how Jinns (spirits) exist in their own world,” says the group. Allah is all-powerful, and there is nothing he can’t achieve on this world.

The flying object returned exactly two weeks after first appearing in our village, at the same exact time, and remained in the sky roving around the village for nearly an hour before disappearing. We are overjoyed because it demonstrates that our village is unique; other towns in the area were not even granted the opportunity.”

However, Brian Engler believes the “UFO” may have been a “fata morgana” mirage, as he mentioned on the website Doubtful News.

“To me, this sounds like a ‘fata morgana’ mirage, but I’m not sure if the meteorological conditions at the time and place would have helped that. On Skeptoid, Brian Dunning has discussed the effect many times, including one that begins with the phrase “castles in the air,” which sounds a lot like what these people described. In any case, it’s fascinating.”

When asked if they had seen any living beings inside the UFO, the villagers of Dulali were unanimous in their answer that no living beings had been seen in that obvious “city” in the sky.

In 2009, only a small percentage of Nigerians had cell phones. This is particularly true in the case of suburban homes. Just the residents’ memories of an incredible event remained.