There are 21 massive Sarcophagi of solid granite, cut on solid rock, in Serapeum in Saqqara, which is close to Memphis. Each weighs on average over 100 tons. The raw material was mined in Aswan’s quarries, about half a mile away.

The English Christopher Dunn, a Project Engineer and Laser Process Manager for a North American Aerospace Company where he is currently Senior, has done research on the methods of drilling and treating stones in Ancient Egypt in his book (The Giza Power Plant), and has proven beyond a shadow of doubt that the ancient Egyptians used modern machinery in the construction of the Pyramids of Giza.

And, based on scientific, archaeological, and historical evidence, it appears that the second option is the best… 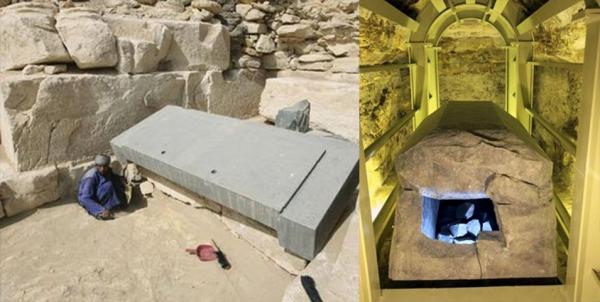 It’s absurd. But it is to the conclusion that the evidence leads us, and in terms of the scientific method, no matter how absurd the destination may be, if empirical evidence leads us there, we must go, whether we like it or not, regardless of our ideology.