The video below was filmed in Al Ain, on the UAE’s east coast, on March 17th of this year. Local resident Ibrahim al-Jarwan was driving when he saw a huge circular object in the sky that seemed to be a portal or “flying saucer.”

The shocked onlooker scrambled to get a phone and use the camera on the unit to take a picture of the phenomenon. The man said that he had never seen anything like it. 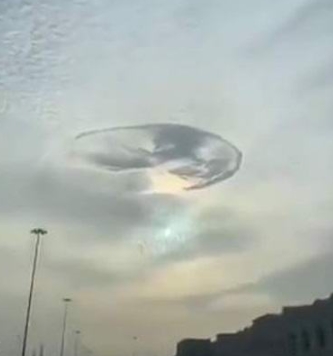 After the man posted the mysterious video to the Twitter social network, it quickly became “viral.” Some users believe that a portal to another dimension has opened up in the atmosphere, while others believe that the aircraft was still that of an extraterrestrial race.

The UFO tried to disguise itself, according to ufologists, but the ship’s disguise failed for unknown reasons. Skeptics and meteorologists claim it’s just a normal plane cutting a hole in the clouds.

For some reason, Ibrahim al-Jarvan was unable to locate any aircraft.