This discovery is quite strange and mysterious to say the least as it was seemingly ignored for a good chunk of history only to, later on, be avoided by most experts altogether.

The discovery was made by a random kayaker, as he spotted what appears to be a massive carved face on the side of a cliff in Canada.

You can see it right here yourself, and we do have to commend the kayaker for his photography skills as it couldn’t be easy to be riding around in a kayak and actually try to snap a good quality picture of such a monument while also fighting the waves. 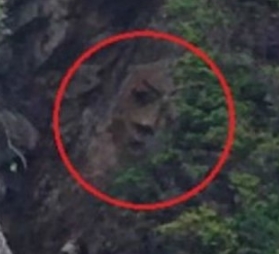 Hank Gus came along in 2015 to see it through as he believed that there must have been something about it that told him more about his heritage as one of the Tseshaht First Nation.

He recorded the discovery in itself, stating that it is around 2 meters tall in total and that you can see it 12 meters up from the bottom and 7 meters from the top.

Given how dangerous this all is, as mentioned previously, he couldn’t actually just climb his way up and take a sample so you can already guess that this wasn’t his big eureka moment where he found out everything there is to it.

Matthew Payne reported that this is most likely one of the Tseshaht’s constructions as they had already been inhabiting the area for thousands of years now but this carving could predate them for all we know.